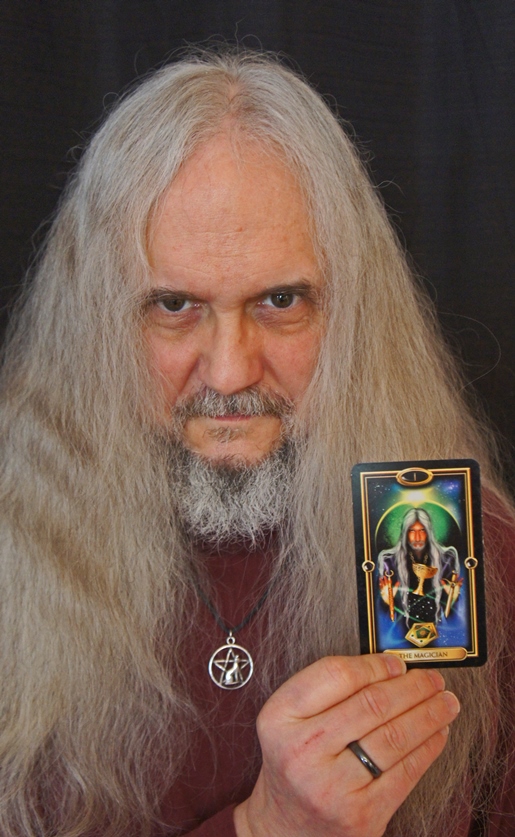 My name is Mark and I am a Tarot Reader.
I've been drawn to the Tarot for much of my adult life, but for many years I did as many people do, and dismissed the idea that there was anything to it. One day I picked up a deck to work with (Ciro Marchettti's Gilded Tarot) and I was surprised at the way I connected with the cards.

After a period of studying and learning about the way the cards worked together I started doing readings for friends and family. I was able to see things in the cards that others did not, and eventually I believed them enough to start reading for others. I have continued to study and learn as I go along, and I know that this will be something I will be doing for the rest of my life. There is so much to know on so many levels, and I love being able to keep learning and sharing with others.

Starcat Tarot? Where did that come from?

I was reading at a Street Fair in King's Park, NY, a few years ago, and the young lady who wanted a reading was with several friends. They wanted to watch and asked if it was OK. I deferred to the young lady and we proceeded to draw the cards with all of her friends standing around us in a circle.

When everything was said and done, among the amazed coments from her friends one of the onlookers told me that I should call myself "Starcat" due to the pendant I wear and a tattoo on my forearm. Both depict Bast with a pentacle behind her - a star and a cat. This lady gave me the name I had been seeking for a while, and I adopted it very quickly.


Reading at Street Fairs and Festivals is only one way I have connected with other people through Tarot; I'm involved in several Tarot Associations and have done Tarot parties for groups, readings through email, as well as reading for friends and family. With this site I have a way for me to connect with more people through the Tarot.

Although I want you to be happy with the results of the readings I will not wrap the message in cotton candy and rainbows. At the same time I don't just blurt things out before considering the best way to say it. Sometimes things come up in readings that we would prefer not to deal with, but they need to be addressed. I believe that it's possible to deliver difficult messages without being too abrupt; we all have feelings and deserve to be treated with respect.
Mark's readings have always been spot-on, both for myself and for readings I've seen him do for others. He is a consummate professional with a positive attitude and a true gift for reading Tarot. ~Diana

The State of Pennsylvania says I have to say that Tarot Readings are for Entertainment Purposes Only.
They obviously haven't spoken to my clients!
Go To Top